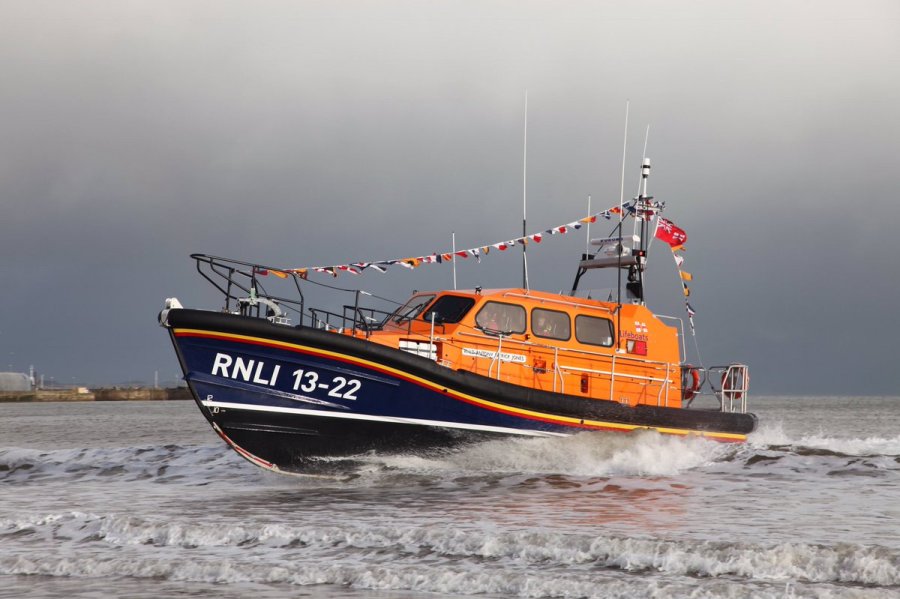 The people of Bridlington have welcomed the town's state-of-the-art lifeboat to its new home.

The Antony Patrick Jones was brought ashore at 1.22 p.m. on Sunday 12 November marking the fact its RNLI number is 13-22 and hundreds stood on the south beach to catch a first glimpse of the boat.

At the helm was coxwain Stuart Tibbett, who said it was the proudest day in his 30 year career with the RNLI.

"It was amazing," he said.  "I am so proud to be the coxwain who brought Bridlington's new lifeboat home.  It was an honour to do it and I did get a bit teary as we saw Flamborough Head.  She could be here for the next 50 years now, that's how long they are built for."

The lifeboat left RNLI headquarters in Poole in Dorset on Wednesday and travelled up the East Coast, staying over in Scarborough on Saturday night.

"It has been a long week and we have been training all the way up, and you really have to run this boat as a team," added Stuart.

They headed back south on Sunday, and were joined by the Bridlington inshore lifeboat, the town's existing Mersey-class boat the Marine Engineer, and Flamborough lifeboat, as it arrived in bay at lunchtime.

Plans to have Scarborough and Humber lifeboat longside them had to be cancelled because of the terrible weather and rough seas, however a number of fishing vessels formed part of the welcoming party.

A rainbow over the harbour as the new arrival came into view added to the sense of occasion, and the crew gave a demonstration of its power and speed for the crowds who had gathered in terrible conditions.

They also laid a wreath at sea and made a brief detour into the harbour, before reaching dry land and being taken into the town's new lifeboat station for the first time.

Among those watching was Richard Dunk, Chairman of the management group at Bridlington Lifeboat Station.  "It's unbelievable, the start of a fantastic chapter in the history of Bridlington Lifeboat and the community of Bridlington.  Bearing in mind the weather, the turnout demonstrates what the lifeboat means to Bridlington.  As a boat, it is an incredible piece of equipment - a tribute to the RNLI.  We are thrilled it is here.  It has been a long time coming but the day has finally arrived and we are very proud."

The new boat is capable of travelling far quicker than its predecessor, which has remained in Bridlington this week while the crew complete training on the Antony Patrick Jones.

It has been named after a local man who bequeathed a large amount of money to Bridlington RNLI which helped to fund the new boat.

Mr Jones was an only child and spent his childhood and young adult life in Bridlington.  He was a keen horseman and was involved with assisting in Riding for the Disabled and also enjoyed swimming.

An official naming ceremony will be held next year.