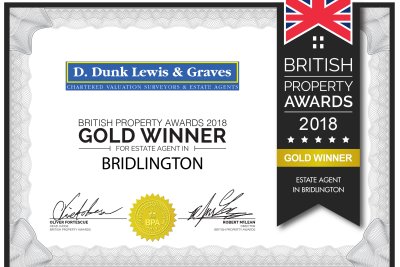 Staff at a Bridlington Estate Agent are “absolutely delighted” to have been judged the best in the Town for the second successive year.

Paying tribute to the Chapel Street agency’s staff, partner Richard Dunk said: “One of our primary objectives is to provide the highest level of service and attention to our existing and future clients and this award is testament to the efforts we have put in place to achieve this. We have an outstanding team at D Dunk, Lewis & Graves and I am delighted that all the hard work they put in has been rewarded with this award for the second year in succession. That’s quite an achievement.”

The British Property Awards are one of the most difficult Estate Agency contests to win as they do not charge firms to enter and thus competition is especially stiff. Typically, more than 90 per cent of agents in a given area will be assessed.

BPA director Robert McLean said: “Our awards have been specifically designed to be attainable to all agents, removing common barriers to entry, such as cost, to ensure we have the most inclusive awards. They have also been structured to remove any opportunity for bias or manipulation. If an agent has been given one of our awards, it is simply down to the fantastic customer service levels they have demonstrated across a prolonged period of time. Winning agents should be proud that their customer service levels provide a benchmark for their local, regional and national competition.”

The British Property Awards team ‘mystery shops’ every Estate Agents, judging them against a set of 25 criteria to obtain a balanced overview of their customer service levels. The judging criteria are both comprehensive and detailed exploring different mediums, scenarios and time periods to ensure agents have been rigorously and fairly judged.

Richard Dunk continued: “We have a reputation for going the extra mile to provide a high level of customer service here in Bridlington and we are delighted this has been further recognised by an independent organisation such as the British Property Awards. So if you notice a little spring in our step, you’ll know why!”

Senior partners Richard Dunk and Richard Graves between them have more than 100 years’ experience. Along with their colleagues Amanda Pannhausen, Michelle Brannick, Anita Saffery, Sarah Cranmer and Abigail Grosse, they provide a comprehensive range of residential and commercial property services.

D Dunk, Lewis & Graves are members of the Royal Institution of Chartered Surveyors and National Association of Estate Agents.