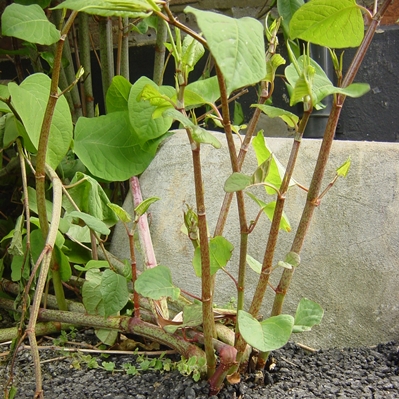 The two words guaranteed to strike fear into the heart of any homeowner, potential buyer or even estate agent: Japanese Knotweed.

The fast growing, highly reslient plant can slow down or even jeopardise the sale of a property, with many mortgage providers refusing to lend on homes with it on or near the grounds.

Fallopia Japonica, to give it its Latin name, creeps into the fabric and foundations of buildings and, left untreated, can cause major structural damage.  Drains and sewers may also be affected.

It can grow up to one centimetre a day and is described by the Environment Agency as the UK's "most aggressive and destructive plant".  The roots of even a small plant can be spread two to three metres laterally and three metres deep from the visible, above-ground growth.

"There's a lot of fear of the plant, not without reason," said Tom Lefek, Director at PROPEGO Ltd.  "It is not the only invasive species in the UK but it is best known and probably most feared.  There's an obligation on the homeowner to prevent the spread of the plant.  It can be a criminal offence to not deal with it adequately."

However, many who have dealt with situations involving Japanese knotweed are less alarmed by it nowadays than they may have been in the past.

Gemma Sykes, an administrator at J Lord & Co estate agents in Davenham, had no experience of the plant until a recent sale the firm was overseeing.  "We had no idea the house we were marketing had knotweed and neither did the client," she explained.  "It wasn't in leaf at the time.  We had one fairly young, inexperienced couple wanting to proceed with a purchase but when the survey brought it up they were scared off.  They were heavily mortgage-reliant so probably wouldn't have been able to go ahead anyway.  The vendor had a report done and was keen to get work started straightaway, which meant we continued to market the property.  The process of eradication was about two to three treatments every few months and cost around £2000-£3000.  It's not ideal but she was happy to pay in order to make the sale.  She knew not treating it would have an impact on the property."

Japanese knotweed should always be treated by specialists, either with a herbicide or taken up and removed.  The extent of the plant will affect which options are available.

As Tom says, agents and property owners should always be upfront about the presence of knotweed.  "We as agents let everyone know it was there." said Gemma.  "You have to be honest and upfront.  Another couple who were interested in the house were cash buyers, so didn't actually need or have a survey, but they did some research into the plant and had a specialist come and take a look at it.  It was then arranged to have something written into the contract to say that the vendor would continue to pay for the treatment throughout."

The sale went through at just under the original agreed price but not all cases are so easily dealt with.

A survey identified the plant on the plot of a property Tom was acting as agent for.  "I had an investor looking at it but I was a bit suspicious," said Tom.  "The price was low and the street had had a lot of houses all up for sale in a short amount of time and all the prices had dropped considrably.  It had obviously spread through the area.  It's important to be conscious of it and what you're dealing with.  Get an expert in.  How established the plant is and how close to the building it is all affects how it can be treated.  I wouldn't advise anyone to go ahead with a sale unless they have as much information as possible."

Toby Leek of Laurent Residential, Barnes, agrees: "Call in a specialist as soon as possible.  The plan of action will be dependent on the severity of the weed but it can be potentially problematic with insurance and mortgage applications."

Information is key. Gemma added: "it doesn't have to be the end of a sale for either party.  We spoke to a lot of people who viewed the house and many of them were very comfortable about it.  It was quite refreshing.  The couple who bought it loved it so much they were happy to take it on - on the proviso that the work would be completed at no cost to them, of course."